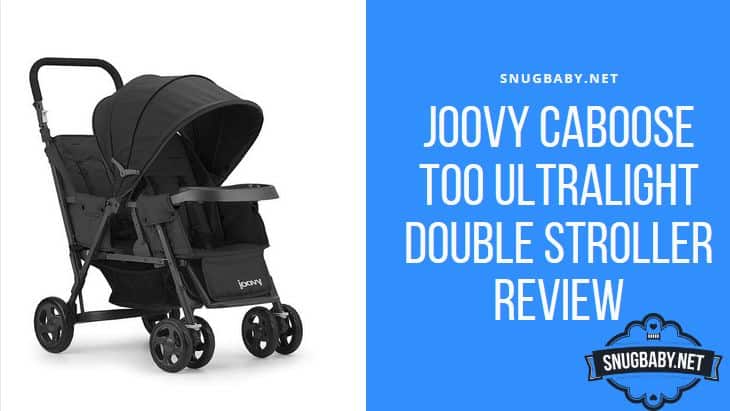 If you’re searching for a double stroller that’s comfortable without being bulky or heavy, you’ve landed at the right place. The Caboose Too Ultralight stroller may just be the perfect fit for you!

We’ve observed parents struggle with double strollers a lot – they don’t go through narrow doorways, they’re difficult to maneuver (especially in busy areas) and some models have price tags so ridiculously high, they give people heart attacks! 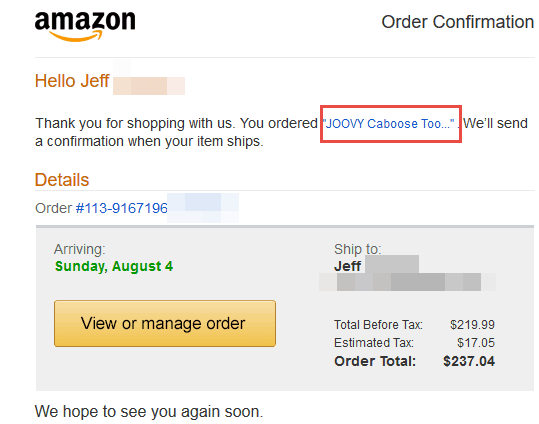 The Caboose Ultralight feels and maneuvers like a single stroller. Joovy has managed the space very cleverly to make things comfy for both kids. It has two seats one behind the other. The front seat is approved for a kid up to 45 pounds. The same holds true for the rear seat as well. The rear seat can be removed in under a minute to reveal a gliding board underneath. Even without the back seat, there’s a bench for a kid to sit on.

As you may have noticed, the stroller offer a lot of flexibility for the rear passenger. In our opinion, the Caboose Too Ultralight is most suitable for a family with two siblings who have an age gap of 2.5 to 4 years (one toddler and one infant is perfect). It’s not a twin stroller. For twins, parents usually prefer models with a side-by-side configuration (like the Bugaboo Donkey Twin). That way, both kids get a great view and feel equally important and loved. There’s also no squabbling over who rides at the front.

However, when the kids are of slightly different ages, the older one can be taught be considerate and in either case, 3-4 year olds don’t like to be confined to the seat when they can walk alongside and feel all grown up. Also, since the Caboose has an attached gliding board, the older sibling can ride on it – you’ll have to admit that it’s more exciting than being strapped to the stroller.

If the older kid gets tired of walking and standing, there’s a bench for him/her to sit on. If the child fancies a more comfortable option, the reclining rear seat can be installed within just a few moments. It’s this kind of remarkable versatility that makes this stroller properly unique!

Despite having so much to offer, the stroller weighs only 23.5 pounds. That’s less than most full size single strollers! Joovy claims that this is the lightest and most compact tandem stroller on the market.

Kids just love the fact that it gives them so many options – toddlers have loads of energy and they absolutely hate being made to sit in one place. They love to walk alongside mom and dad. The next moment, they want to try their hand at pushing the stroller. After a while, they want to be cool and ride on the board. Then they want to enjoy an ice-cream while sitting on the bench. Finally, when they’re tired, they’ll get into the (removable) rear seat for a bit of rest. The younger ones are still finding their feet and are usually content riding at the front, especially if you add a treat or two into the mix.

The board is bolted onto the stroller securely. Many strollers have them as optional accessories but they behave exactly like....well, optional accessories, which means that they are wobbly and jiggly! The Caboose folds even with the board still attached to it.

Already like the Caboose? Wait, we’re barely scratching the surface. Let’s find what other features it’s got.

Full-Fledged Double Stroller: The stroller includes everything that’s needed for two kids to ride comfortably – the front seat, a full size rear seat as well as the gliding board.

The front seat can accommodate a kid who’s at least 3 months old and all the way up to 45 pounds. The rear seat is suitable for 2.5 years to 45 pounds while the riding board is approved for 45 pounds.

The cumulative carrying capacity of both seats is 90 pounds. The stroller can also hold additional supplies (more on that later)

Converts Into A Travel System: The stroller is capable of accepting ONE infant car seat. It goes at the front in a parent facing position. A universal car seat adapter is included with the stroller and it’s compatible with a whopping 28 different makes of car seats!

The fact that the Caboose Too converts into a travel system makes it usable from birth. It can accommodate and transport an infant safely and comfortably.

Note: Car seat is not part of the deal. Needs to be bought separately.

Smooth & Maneuverable: The stroller is very easy to steer. Some doubles are so clumsy and bulky, it feels like driving a fishing boat! Parents have nightmares getting through narrow doorways – they have to dismantle everything and assemble it all over again or just avoid going that route.

The Caboose Too Ultralight is so nimble, it can put some umbrella strollers to shame. No more three point turns at tight supermarket aisles!

Lightweight strollers are not really well-known for their plush rides. While, the Caboose Too Ultralight is not as pliant as a Bugaboo Fox, it rides fairly smooth as long as you stick to city roads.

Reclining Seats: Both seats recline to multiple positions. The front seat falls back even with a kid in the rear. In some strollers, the toddler seat can be adjusted to an almost horizontal position. Obviously, the ones in the Ultralight cannot be laid fully flat as there’s a kid sitting at the back as well. Still, the angle is comfortable enough to allow both kids to rest.

Sun Canopy: The front seat has a large and conventional Sun canopy that shields the occupant from the elements. The rear seat doesn’t get a three-fold canopy as such; it’s just a straight bit of fabric but hey, it does the job and we think that it’s quite clever! It keeps things airy at the back and prevents the back passenger from feeling claustrophobic.

Quick Fold: The strollers folds up really quickly and neatly via a trigger mechanism. It’s flat enough to fit in most cars.

While the stroller doesn’t have a one-hand fold, it’s not that big of a deal since it’s not a bulky, heavy product. Of course, we’d have loved a free-standing fold but the Caboose Too Ultralight has so many other things going for it...we’re choosing not to be overly critical of this particular matter.

6-Wheels: The stroller has two wheels at the rear and two wheels each at the two front axles. The additional wheels provide better traction and stability. We have tested this stroller extensively and it performs very well in urban conditions.

It will even go over grass and the occasional sand pit or gravel patch without missing a beat. However, it’s strictly not built for dirt tracks. So we’d suggest not testing its off-roading limits too much!

Child Tray & Parent Console: The stroller is equipped with a child tray at the front. This encourages the younger one to eat independently without making too much of a mess. There’s also a parent console with two beverage holders. It’s a nice touch as the under-seat storage area is a little short on space.

Safety: This Joovy product is JPMA certified. It meets all federal ASTM and other standards.

​My ONLY gripe is that the back seat passengers legs are in the bottom storage basket, so storage on this could be improved.  That said, we still love it - it's easy to fold with one touch, and we take this one to Disneyland every week!

We’ve been using the Joovy Caboose Too Ultralight for several months and even though it’s not perfect, it feels and steers like a single while carrying both kids comfortably. Honestly, we’re not complaining!

​For more Joovy Reviews, check out: