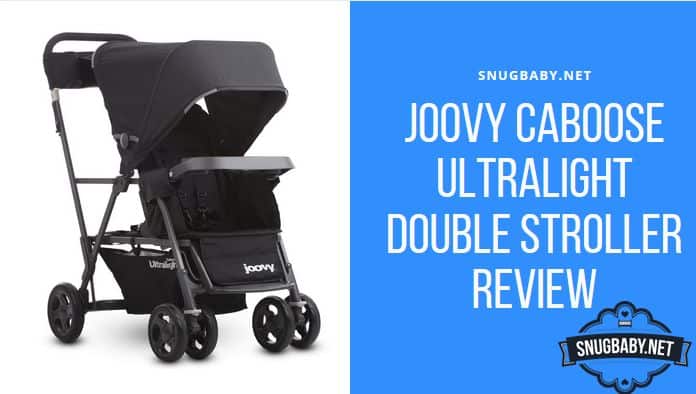 ​The Joovy Caboose Ultralight is well...a stroller with foresight. According to Statista.com, the average number of children in a family in the US is 1.93 (let’s round it up to 2, shall we?)

This indicates that a significant number of families have more than just one kid. So why invest in a stroller that accommodates only one child? It makes no sense at all!

We sort of understand why parents refrain from double strollers. They’re heavy, difficult to move in tight spaces, and are typically quite bulky. Some of them don’t go through standard doorways and frankly, it can be extremely frustrating and downright embarrassing trying to steer an unwieldy cart through busy areas.

But...(and it’s a big ‘but’) what if the stroller in question was as light as an umbrella stroller while still being roomy and comfy enough to accommodate two kids? Well...that sort of describes the Joovy Caboose Ultralight.

It’s one of the most compact and lightweight strollers out there. It weighs in at a mere 22 pounds which is phenomenal for a double stroller.

The stroller includes one forward facing toddler seat plus a rear bench and a riding board. The front seat can accommodate one kid while an older kid can sit on the bench at the rear (in a parent facing position of course) or stand on the glider board and have a bit of fun!

Usually, we prefer double strollers that have a side-by-side seating arrangement. However, they’re designed for twins or two kids of a similar age and weight. They’re certainly not suitable for families with one toddler and one infant as the weight distribution would be totally off and mess with the dynamics of the stroller.

Yes, side by side seating has its pros as there’s no fighting over who will occupy the front seat. However, this is not a big deal if the two kids are of different ages. In the Joovy Caboose Ultralight, the younger sibling goes at the front while the older one gets to feel all grown up by standing on the riding board.

In fact, the elder kid can choose between three options – they can walk alongside the stroller like a big boy or girl. If they get tired, they can sit on the rear bench. When they become bored of sitting in one place (not likely if they’re watching cartoons on mom’s cellphone), they can hop on to the board for an exciting ride!

Hey, but that’s not it. The Joovy Caboose Ultralight converts into a full-fledged, conventional double stroller via the addition of the rear seat accessory. With the rear seat attached, the stroller becomes much more comfortable for the rear passenger and we definitely recommend it for kids who’re not old enough to walk/stand independently. The back seat’s easy to install/remove – takes very little time.

In our experience, once kids learn to walk properly, they don’t like to be confined to the stroller seat and would rather have the flexibility of walking, standing or sitting (on the bench).

The rear bench and board are part of this package but the full-size rear seat needs to be purchased separately.

Converts Into A Travel System: Honestly, we were not expecting a stroller so light and compact to be travel system compatible. This is just one of the several aces that this Caboose possesses.

The stroller accepts a single car seat at the front and only via an adapter. Joovy has been thoughtful enough to throw in a universal adapter with the stroller. Generally, parents prefer specialized solutions like the inbuilt adapters on several Chicco strollers that have a quick click-in attachment. However, the ones manufactured by Joovy are quite good too. They’re compatible with 28 different makes of infant car seats!

Click-in adapters (like the ones on the Chicco Caddy Frame) may be convenient but they accept only 1 or 2 models of car seats. The ones of the Caboose are undoubtedly more versatile. Having said that, we suggest that you pair this stroller with something popular and safe, such as the Chicco KeyFit 30 car seat – it’s been in production for more than ten years so it’s a pretty fool-proof option. It’s not called America’s favorite infant car seat for nothing!

Do note that the stroller can accommodate only one infant car seat (not two). It goes over the front seat and faces the rear when installed. This way, the infant is always in the line of sight of the caregiver. This is reassuring for both the baby and the parent.

Multi-Position Seating: The front seat reclines to several positions. It doesn’t fall fully flat but the angle is comfortable enough to allow the occupant to rest. The rear seat too, is adjustable and doesn’t prevent the caregiver from walking normally when reclined backwards. The front seat can be reclined even when the rear seat is occupied.

If a kid is sitting on the rear bench (not the rear seat, mind you), the front seat should ideally be positioned upright as things get a little uncomfortable if it’s allowed to fall back completely. There’s not much space left for the elder sibling who’s sitting facing the parent.

Overhead Canopy: The front seat features a large, adjustable canopy to block out the Sun. The rear seat gets an extendable canopy that stores in the parent compartment and zips on to the front canopy. It’s more of a flap than a conventional three-fold hood. We were skeptical at first but we realized that it’s good enough to keep the Sun out and yet keeps things nice and airy at the rear.

Considering the ergonomics of this stroller, a conventional canopy would have made the rear seat dark and claustrophobic. So the flap kind of grows on you.

Six Wheels: The stroller has a four wheeled design. There are two wheels at the rear and four at the front (two wheels fiited together on the two axles). The two extra wheels provides enhanced stability and better grip.

All the wheels are of the same size – they’re designed for use on paved roads only. They can handle grass when required but this is certainly not a multi-terrain stroller.

All Wheel Suspension: Lightweight strollers usually have no suspension altogether. Some models possess only rear wheel suspension. In the Caboose though, each wheel is lined with ball bearings. This, along with the individual springs ensures that the stroller rides like a dream. It’s very smooth and absorbs small and medium sized bumps with ease.

The Caboose Ultralight is eager to go. It pushes easily and the maneuverability borders on telepathic! The linked brakes can be engaged with the tap of a foot to lock the stroller in position when parked.

Quick, Compact Fold: The stroller folds easily and doesn’t account for too much storage place. It folds with the rear seat and board attached to the frame.

The fold is not self-standing but it’s fairly flat and the stroller should fit in the backs of most cars without a problem.

Aluminum Frame: This updated version is 10% lighter than its predecessor. It tips the scale at just 22 pounds. Aluminum is 67% lighter compared to steel. Hence, the frame has a very good strength to weight ratio.

Parent Organizer: The stroller is equipped with a parent console that’s made out of fabric (we think it’s neoprene) rather than plastic. It includes a storage compartment and two beverage holders. Always nice to have a refreshing drink at hand when out and about with the kids.

The Joovy Caboose Ultralight is not just good for two kids, we think that it’s a wise choice even for families with just 1 baby. Who knows, a new member may joint the club a couple years down the line!

​For more Joovy Reviews, check out: