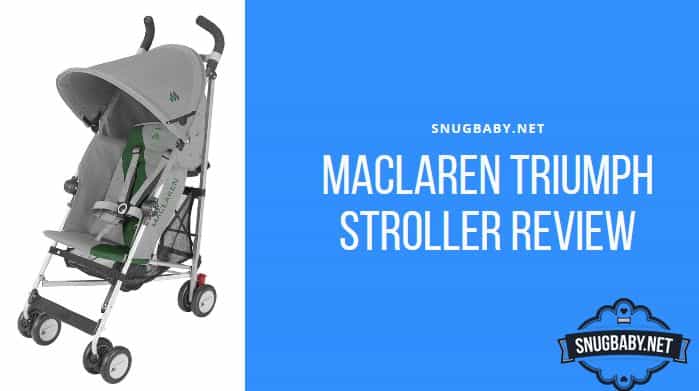 ​The Maclaren Triumph is a lightweight stroller aimed predominantly towards urban dwellers. It’s prized for weighing just 11.9 pounds and being highly maneuverable. Cities have maddening crowds and many parents prefer using public transport to being stuck in traffic for a significant chunk of their life! Hence, an agile stroller than folds/unfolds quickly and is easy to carry makes a lot of sense in modern localities. It simply triumphs conventional travel systems as they’re complicated, heavy and bulky.

Maclaren is renowned for making some of the best umbrella strollers in the world. It’s a 50 year old brand with British roots. In 1965, a man named Owen Maclaren observed that contemporary strollers and buggies were too bulky and just plain impractical. Now, Owen was a test pilot and an aircraft designer, so he put all his ideas and experience into designing a state-of-the-art baby buggy. It was crafted out of aircraft grade aluminum and weighed under 7 pounds! Owen patented the model and it sold like hot muffins, making Maclaren an international brand of high repute. Even today, Maclarens feature avant garde designs and are products of dextrous engineering.

Many people love the Maclaren Triumph’s simplicity. It does everything that it claims it can do and goes about its business with gusto and enthusiasm. Unlike most other umbrella strollers which only accommodate toddlers who’re between 30 to 40 pounds, the Triumph’s seat is approved for a kid weighing up to 55 pounds. So even though the stroller is light, it’s certainly very sturdy. In fact, it comes with Maclaren’s Lifetime Warranty. If you use it with care and do some basic maintenance like cleaning out the debris that’s get caught in between the wheels, the stroller has been proven to last for years.

At first thought, we were unsure about the Triumph’s price tag. Even though it’s not in the ridiculous range, it certainly is higher than average for an umbrella stroller. However, when we took some time to understand the brand’s philosophy and integrity, we realized that users can get a lot of mileage from this stroller. Often, umbrella strollers are treated as disposable products – just use and throw. It’s okay, they’re cheap and parents do not expect much from them in terms of performance. However, the Triumph, if kept well, can be used for one kid, then another and perhaps even for a third one!

Even though it’s one of the world’s most rewarding jobs, parenting is a tiring, full-time occupation. Moms and dads are busy and the last thing they want is to work an unwieldy and awkward buggy. Convenience is the name of the game and the Triumph is just that. It’s JPMA certified so there’s no question regarding it’s safety and build quality. It weighs less than 12 pounds and hence, even if parents encounter an unexpected flight of stairs, they can just throw the stroller over their shoulder and go for it. The front wheels can be locked when going over straight roads and they swivel for navigating supermarket aisles with the exuberance of an Italian sports car. That covers just about everything parents need and want from their strollers, right?

Multi-Position Seating: The stroller seat can be reclined to several positions. It’s suitable for babies who’re 6 months old and up to 48 months or 55 pounds. The seat is removable and washable. A clean fresh looking seat lends visual appeal, is more comfy (hygienic) and makes the stroller seem as good as new, even after several years of usage.

The backrest can be adjusted on the go, with just one hand. Parents don’t need to fiddle with it to get it to work – it can be tweaked while strolling and that’s super convenient. For example: If you notice that your toddler has fallen asleep in the seat, you can recline it quickly and smoothly without disturbing him or her.

Now, umbrella strollers don’t have much in the name of harnesses. They have some narrow cords that are supposed to keep kids safe but they are so uncomfortable that kids refuse to wear them in the first place. The Triumph has wide, high quality straps that are held together by a smart and cute aviator style buckle (told ya Owen was a pilot). This means that parents won’t have to coax, cajole and bribe their toddler with candy just to get them to wear the harness.

Sun Canopy: The stroller comes with a removable and adjustable Sun canopy. It offers UV protection and is also waterproof.

The Triumph is also one of the few strollers that include a rain cover in the box. The cover is wind resistant and fits the stroller perfectly. It’s not easy to find after-market covers that fit properly over such a compact frame and moreover, generic covers flap incessantly in breezy conditions! Also, since the covers are not tailor-made, they’re a bit fiddly and by the time parents manages to get them onto the stroller, everything and everybody is already soaking wet!

As you may have probably noticed, the stroller might have seemed a little expensive at the beginning, but convenience features, JPMA certification and benefits like the Lifetime Warranty more than justify the price.

Aluminum Frame: More often than not, strollers are built upon a steel chassis. Now there’s no doubt that steel is highly durable but there’s also no getting around the fact that it’s also very heavy. Aluminum may not be as strong as steel but it weighs only one third that of the former. Hence, it has a much better strength to weight ratio. No wonder it’s the metal of choice for manufacturing aircraft.

The Triumph weighs only 11.9 pounds and that really makes it a compelling proposition for families who like to travel light. It’s the ideal stroller for frequent flyers and for those who use public transport often. It’s compact size means that it fits in the boots of even small hatchbacks. (We’ll talk about cars a bit more later in this post)

8 Wheels: The stroller has a four wheel design. However, instead of the usual one wheel, each axle has dual wheels, resulting in a total of 8 wheels. Now this is really clever as twice the wheels equals to twice the grip! The stroller is equally at home on short grass, cobblestone streets, pavements and even indoors. Often, shopping complexes and malls have very smooth tiles and lightweight strollers, with the tiny wheels, struggle to maintain traction. The Triumph doesn’t have to contend with such problems and it’s also a whole lot more stable than your average umbrella stroller.

Quick Fold: The stroller folds quickly with one hand. It does not stand on its own when folded but it’s got a shoulder strap that makes it easy to carry. The stroller locks automatically when collapsed – parents don’t have to worry about it opening up accidentally. Also, as mentioned earlier, the Triumph has very compact dimensions for easy storage.

Swivel-Wheels: These make the stroller very easy to maneuver. Umbrella strollers have a horrendous ride and are notorious for jamming in place and tipping over. The swivel locking wheels ensure smooth sailing over most urban surfaces.

The wheels can be locked for straight strolling. The stroller parks securely once the toe-tap rear brakes are engaged.

Storage Basket: There’s a storage compartment located underneath the stroller seat. It’s not very large but has high edges and is commensurate with the size of the stroller.

From what you’ve read, it is quite evident that the Maclaren Triumph is a highly capable umbrella stroller. However, we suggest that you give this model a pass. It’s not that the Triumph is a bad stroller, we’ve just found a better one and.....drumroll... it’s the Quest, also by Maclaren.

You see, both strollers weigh the same but the Quest has a couple of features that put it way ahead of the Triumph. It has all wheel suspension for an even smoother ride and also features the very unique newborn safety system, which makes it suitable for infants.

Yes, the Quest is pricier than the Triumph but you do get a lot more for the money. Considering all things, we’d like to recommend the Quest over the Triumph as it’s capable of doing everything that the latter does plus it’s also usable from day 1. In short, it can serve as the one and only stroller from birth to toddler. There’s no need for upgrades (unless parents want a travel system).